skip to main | skip to sidebar

Bleier: “On the Brink of Armageddon: LBJ, the Six-Day War, and the Attack on the U.S.S. Liberty” Amazon and B&N ebook


I’m pleased to announce that “On the Brink of Armageddon: LBJ, the Six-Day War, and the Attack on the U.S.S. Liberty” is now available as an ebook on Amazon’s Kindle and B&N’s Nook for $2.99.


On the Brink of Armageddon  –Amazon


Amazon also offers the first few pages on its “Look Inside” link.

On the Brink of Armageddon – B&N


“On the Brink” is also posted on my DESIP website and on bleiersmiscellany.blogspot.com 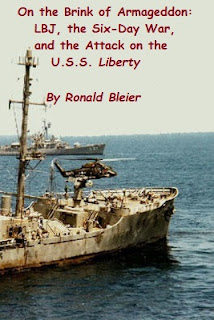 "On the Brink of Armageddon" highlights the theory outlined in a  book by BBC documentarian, Peter Hounam:  "Operation Cyanide: Why the Bombing of the USS Liberty Nearly Caused World War III." From Hounam and others it can be inferred that President Johnson masterminded both the Six-Day War of 1967 and the Israeli attack on the Liberty. The latter operation was planned as a false flag attack, not unlike Johnson’s Gulf of Tonkin hoax, this time to be blamed on Egypt. It seems that President Johnson hoped the sinking of the Liberty would serve as a pretext to join Israel’s war.


The work of Stephen Green in the 1980s, principally his book, "Living By the Sword: America and Israel in the Middle East," revealed that the U.S. was deeply involved in Israel's  war and must have been colluding with Tel Aviv for many months before June 1967.


“On the Brink” details some of the evidence supporting Hounam’s incredible theory that LBJ planned to initiate  World War III with the bombing of a Soviet air base near Cairo with a nuclear-tipped weapon. In the end, Cairo  was spared the intended nuclear attack when the USS Liberty miraculously somehow escaped from its intended fate.
Posted by Ronald at Friday, February 08, 2019 No comments:

Support for ISIS Comes From the U.S. and Israel -- Bernhard Curates the Evidence

How did ISIS get started? Who has been supporting them all these years? The U.S. and Israel. Duh.

After initially making a show of finally following the Russian example and destroying some ISIS tankers, the U.S. found excuses not to continue. See for example, "US Planes Left ISIS Fuel Tankers Unharmed Because 'They Ran Out of Ammunition'"


The interesting question is whether Trump knows or wants to know of U.S. support for ISIS. If, for example, he really wanted to put an end to the ISIS threat, all he would have to do, as Bernhard explains, is leave Syria and allow Assad to do the job. Which Damascus would be only too glad to do including ISIS sleeper cells which, once again are supported by the U.S. and Israel because they serve their interest in continuing the war indefinitely.

For years, Bernhard has been citing documentation of U.S. attacks on Syrian forces in coordination with ISIS.

Here’s a brief reference in his blog of 2.4.19 (Search for moonofalabama.org: "Trump Says U.S. Will Leave But Pentagon Keeps Adding Forces.)

On Saturday a U.S. air attack targeted a Syrian army position south of the Euphrates near the border town al-Bukamal:
A military source told SANA that the U.S.-led coalition warplanes carried out an air strike overnight Saturday on Syrian artillery position in Sokkariyeh village, west of al-Bukamal city.
The source added that the attack resulted in destroying the artillery and injuring two soldiers.
SANA reporter said that, in parallel with the coalition’s aggression, Daesh terrorists attacked military points in the area, but the army units repelled the attack and killed and wounded most of the attacking terrorists.


This is one of several incidents indicating the U.S. intentionally lets some ISIS fighters escape to attack the Syrian government.
Posted by Ronald at Wednesday, February 06, 2019 No comments: